2018 marks the 5th anniversary of the “Belt & Road” Initiative and is expected to see the further development of the “Golden Era” of China-UK relations. To promote exchanges and cooperation between Chinese and British enterprises seeking win-win cooperation and mutual development, the China Chamber of Commerce in the UK (CCCUK) has organised the first ‘China-UK Economic and Trade Forum’ on 18th January 2018, in Guildhall in the City of London. Mr Geng Jinhai, CEO of China Taiping Insurance (UK) Co Ltd. and the Vice Chairman of CCCUK, along with over 280 political, business and academic leaders attended the forum. It focused on two main topics: the first was the “Belt & Road Initiative - Strategy and Engagement Model for Economic and Trade Cooperation Between the UK and China”; the second was “BREXIT - Opportunities, Challenges and New Business for British and Chinese Enterprises”. 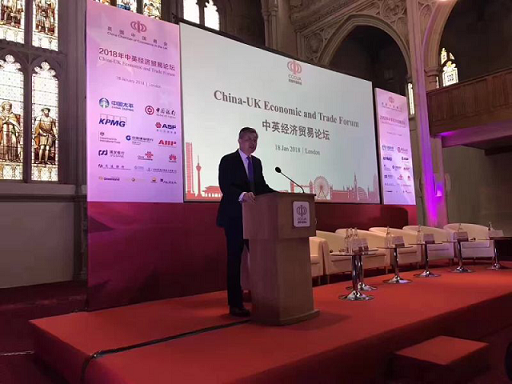 H.E. Ambassador Liu Xiaoming; Rt. Hon the Lord Mayor of the City of London Alderman Charles Bowman; Commercial Minister Counsellor Jin Xu; and Chairman of China Chamber of Commerce in the UK Sun Yu attended this forum and delivered keynote speeches. H.E. Ambassador Liu Xiaoming stated, to mark the celebration of the 45th anniversary of the ambassadorial diplomatic ties between China and the UK, the two countries have taken the "Golden Era" a step further, enriched bilateral cooperation and harvested many "golden fruits" from the past year. China Railway Express ran its first freight train between China's Yiwu and London, which offered a new, on-land option for the movement of goods between China and Britain, and extended the "Belt & Road" to the very western end of Europe. The year of 2018 will also be an important year for China-UK relations, H.E. Ambassador Liu Xiaoming said, ‘Prime Minister May will pay an official visit to China. This is now high on the agenda of our bilateral relations. Both China and the UK attach great importance to this visit. Both want to take this opportunity to expand, elevate and deepen our mutually-beneficial cooperation. Our goal is "Golden Era" 2.0.’ 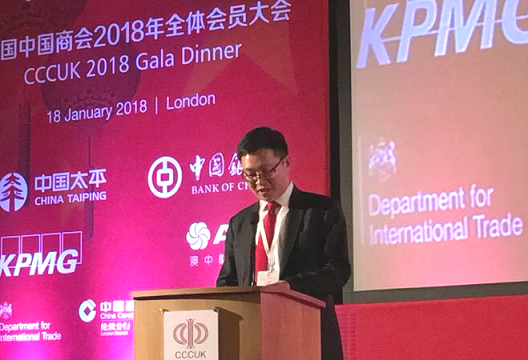 China Taiping Insurance (UK) Co Ltd. CEO and CCCUK Vice Chairman Geng Jinhai made the closing speech on behalf of the China Chamber of Commerce in the UK. He emphasised the significance of the ‘China-UK Economic and Trade Forum’, which would not only benefit both the UK and Chinese business communities at large, but also would provide a networking platform for business opportunities, showing united forces of both UK and Chinese commercial partners and strengthening the relationship and friendship between China-UK business communities. Mr Geng said, ‘After today’s event, we have felt the increased confidence for the investment and businesses in UK and China, and we look forward to the even closer co-operation between our two countries. Particularly after UK Prime Minister Teresa May’s upcoming visit to China. The future is bright, but we cannot ignore the challenges and difficulties, especially in the current business environment. Brexit or cost increases for instance. However, we should maintain our long-term vision, keep our beliefs and values, or keep the ‘bulldog spirits’ as the British say.' 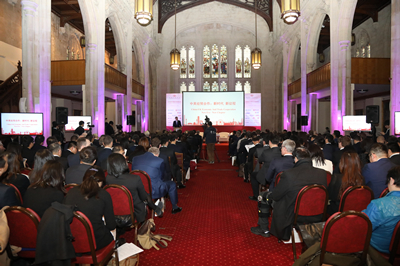