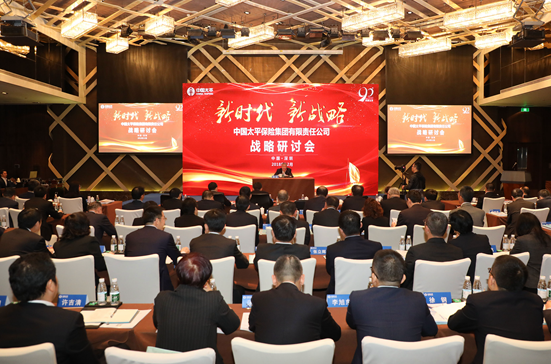 The meeting highlighted that China Taiping will adhere to our national needs. The Group’s new internationalisation strategy could be summarized as "one goal" and "six major initiatives." "One goal", is to "build a modern international financial insurance group with global competitiveness". The "Six major initiatives” are to : (1) enhance the overall awareness of serving the national significant strategies; (2) launch the "Sharing Taiping" development concept; (3) create an internationalisation development direction; (4) set up the development foundation of informationisation; (5) build a market-oriented development mechanism; and (6) give full play to the governance advantages of state-owned enterprises.

The conference emphasized that internationalisation is the core content of China Taiping’s new development strategy. It can best reflect our characteristics, highlight our advantages and represent our future development direction. By accurately grasping the basic judgments and time connotations of the central government during the significant strategic period, the establishment of our new internationalisation strategy comprehensively considering researching the development trend of the insurance industry and reflecting our unique characteristics. They are and will be the guidelines and action plans for China Taiping Group’s further development.

The meeting stressed that it is necessary to speed up the pace of informatisation construction and turn informationisation into the Group’s core componence and basic productivity. It is essential to accelerate market-oriented reforms, establish a more market-oriented system and mechanism, and constantly stimulate new impetus and vitality. It is also required to adhere to both business development and cultural construction and promote the concept of "Sharing Taiping".