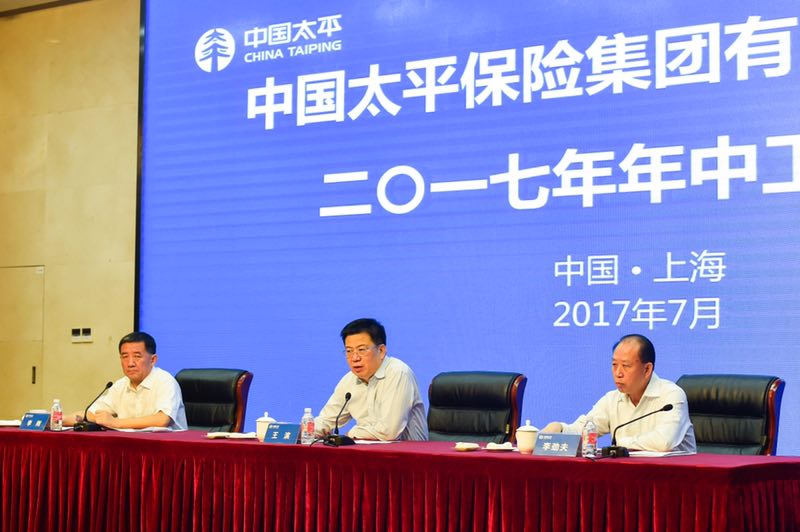 The Mid-Year Work Conference of China Taiping Insurance Group Ltd took place on 25th July 2017 in Shanghai.  Mr Bin Wang, Chairman of the Group, made a keynote speech. He said that we should stay unified in our ideology, focus our efforts on implementing the group strategy and lead the way in financial risk control and reforming our industry. Mr Jinfu Li, Deputy Chairman and General Manager of the Group, reported on the business operation of China Taiping, urging everyone to remain confident, to further improve our performance and to meet all the targets.  He also reviewed the performance of the Top-quality Strategy during the first half year and set out the task for the coming months. Mr Gang Li, Chief Supervisor of the Group, hosted the conference.

During the first six months of 2017, the Group's total premium income has reached RMB 100.80 billion. It is the first time in the Group's history that the six-month figure has broken the RMB 100.00 billion brackets.  Total asset of the Group has exceeded RMB 500.00 billion and total asset under management is nearly RMB 900.00 billion, exceeded all targets.

The performance of the domestic core businesses has been outstanding while overseas business has also grown at a reasonable rate. During the first six months in 2017, the original premium income for Life Insurance has reached RMB 78.94 billion. The rate of premium income growth, the value of new businesses and the intrinsic values have all performed well.  In the domestic market, the rate of growth of General insurance premium is above average.  Against the current downward trend, the Group's corporate annuity business has grown rapidly, being ranked as the fastest growing company in the market.  The overseas institutions of the Group have generated RMB 8.96 billion premium income while their market share has also increased.  Taiping-Starr Insurance Agency has made a premium income of USD 3.068 million, signalling an auspicious beginning.

China Taiping has fulfilled its social responsibilities, actively involved in the poverty reduction programme, and have consequently been named as one of the top Chinese insurance company in poverty alleviation. At the same time, we have also been actively supporting the care home and healthcare sector.

Innovation remains the core of our business in which we have steadily invested and reaped the reward, our new products.  So far, we have signed the agreement with over 70 strategic clients, aiming to offer a 'One Client, One Taiping' integrated service. We have entered the Brand Finance's list of ‘World’s most valuable Insurance Brands Top 100’. Amongst the seven Chinese insurance companies, we have succeeded in becoming the fastest growing in rankings.  On ‘Interbred Best China Brands 2017’, our brand value is estimated at RMB 4.228 billion, ranked as the top five within our industry.

During the conference, it was stressed that we should continue to make a comprehensive deployment of the ‘Top-quality Strategy’. The Group shall retain the essence of our businesses and return to our origins, which is to cover the risks and meet the insurance needs of our customers. For the domestic market, we shall continue our efforts on innovation, broaden our business scope and optimise our business structure. We should endeavour to achieve growth in scope as well as profitability.  For overseas market, we shall strive to seize growth opportunities, increasing our strength and influence while improving our services and enhancing our capability.  We shall also continue to carry out the globalisation strategy and grow our overseas businesses.